Our Vision is 'To love our neighbour, enabling everyone to flourish and reach their full potential.'

Our inspiration comes from Luke 10:27

The vision is shared using the parable of The Good Samaritan. 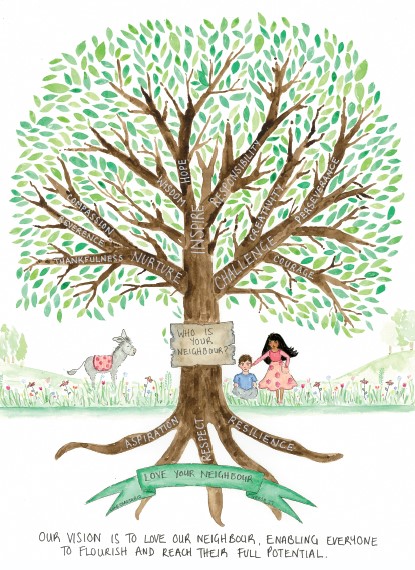 In the parable of the Good Samaritan the main character shares our values. The Samaritan showed a respect for all living things and with nurture was able to help the injured man. This character also demonstrated that when things are a challenge, we can be resilient and offer love and support for others. We take inspiration from the Good Samaritan and aspire to love our neighbours as he did.

In accordance with the Department of Education, we aim to promote Fundamental British Values within our federation to ensure children leave our schools prepared for modern life in Britain.  As a federation, we use Jigsaw to teach our PSHE/RSE curriculum and British Values are intertwined throughout our PSHE teaching.  Below is a link showing our Jigsaw topics and how British Values is taught within it.

Our school Vision is 'To love our neighbour, enabling everyone to flourish and reach their full potential.'

Our values as a federation are

We believe that these values underpin our ethos and teaching within our schools, and they are intertwined throughout promoting British Values within our federation.

Being part of Britain

Further, children learn about being part of Britain from different specific perspectives, for example, in Geography we learn about our local area and how it differs to other areas of Britain and countries around the world and in Science we learn about British plants that grow around us.

Children, parents and staff have many opportunities for their voices to be heard at our schools. Democracy is important for all members of our school community.

An obvious example is our School Council. It is made up of pupils from each class and the School Council meets regularly to discuss issues raised by the different classes. The council has its own budget and is able to genuinely effect change within the school.  The Council are actively involved in recruitment and in providing teachers with feedback.

Other examples of ‘pupil voice’ are:

Pupils are always listened to by adults and are taught to listen carefully and with concern to each other, respecting the right of every individual to have their opinions and voices heard. We encourage pupils to take ownership of not only their school but also of their own learning and progress. This encourages a heightened sense of both personal and social responsibility and is demonstrated on a daily basis by our pupils.

The importance of rules and laws, whether they be those that govern our school or our country, are referred to and reinforced often, such as in assemblies and when reflecting on behaviour choices. At the start of the school year, a class might discuss and set its own Class Charter, a set of principles that are clearly understood by all and seen to be necessary to ensure that every class member is able to learn in a safe and ordered environment.

Pupils are taught the value and reasons behind laws, that they govern and protect us, the responsibilities that this involves, and the consequences when laws are broken. These values are reinforced in different ways:

Alongside rules and laws, we promote freedom of choice and the right to respectfully express views and beliefs. Through the provision of a safe, supportive environment and empowering education, we provide boundaries for our young pupils to make choices safely; for example:

Our pupils are encouraged to know, understand and exercise their rights and personal freedoms and are taught how to exercise these safely, such as in our e-safety and forest schools lessons.

Mutual respect and tolerance of those with different faiths and beliefs

Our schools are small village schools set within Norfolk and therefore we do not have as much diversity as other schools.

Our pupils know and understand that it is expected and imperative that respect is shown to everyone, whatever differences we may have, and to everything, whether it is a school resource, a religious belief or whatever. Respect is one of our school values and is a theme for a half term. Children learn that their behaviour choices have an effect on their own rights and those of others. All members of the school community should treat each other with respect.

Specific examples of how we at Woodton and Ellingham enhance pupils understanding and respect for different faiths and beliefs are:

Something which is clearly not part of any British or European value is extremism. It is important to remember that whilst the threat from so-called Islamic State has been a focus in the Counter Terrorism and Security Act, the Prevent Duty is clear that extremism of all kinds should be tackled too. In England, far right groups such as Britain First and the English Defence League need to be tackled, too. Extremism is not a new topic in education, but schools have a relatively new statutory duty to pay “due regard to the need to prevent people from being drawn into terrorism”.

Read the government’s Prevent duty guidance and its guidance for schools.

Scroll back to top